The Amani school began in 2008 as an outreach to a Digo farming community on the East African coast. Currently, almost 300 primary children receive a quality education, meals, vocational training, and Christian mentorship. A local church has been planted in the community, and plans are well underway to erect a high school.

The Amani school was able to reopen on June 29th after remaining closed for 3.5 months. As of now, there are no known cases or apparent symptoms of COVID-19 in the Pande community (northeastern Tanzania), where the school resides, although there is no longer government testing for the disease. Nevertheless, the community was not spared the economic impacts of the closures during the lockdown.

The efforts of the administration and teachers at the Amani School during the lockdown was inspiring to the whole community. When closures began, they were the only school in the area to begin serving children remotely with homework. Teachers pooled their own resources to pay for some of the added transportation needs required. Before long, other schools we’re taking notice, and decided to take up the delivery of school materials to students, modeled after what the Amani School was doing.
222 students received remote education through the regular delivery, pickup, and grading of schoolwork and quizzes. The 115 most vulnerable families were also supported with regular food outreach, supporting over 800 individuals. Soap and masks were also distributed to families throughout the summer.

"I want you to know that who you are and what you are doing for christ matters more than you may tell yourself. It was not easy for most of the the schools in Tanzania, but you helped us pull through."

The land purchase for the new high school is now complete! The financing included some modest financial contributions from the local community. The survey for the high school is in draft form and is expected to be completed in November. Bishop Salalah of the Africa Inland Church of Tanzania joined Pastor Majama at the school on October 6 - celebrating the launch of the project and praying that it may bear many fruits in the community. The Bishop encouraged the students and the community to take good care of the gifts and spoke to the importance of family commitment – an important message in Pande, given the prevalence of broken homes.

In Tanzania nearly everyone loves “football” (soccer), and sport has a unique capacity to bring people together. This fall, Hope Story and the Africa Inland Church of Tanzania initiated a soccer outreach for young adults in the Pande community. In a community where following Jesus can mean losing your parents, your spouse, or even your children, this outreach will engage young adults outside of the Amani School in mentorship and regular Bible study. We hope to foster an environment where individuals feel free from persecution and are supported in considering a relationship with Christ. The team pictured above had been dubbed “Amani United.” 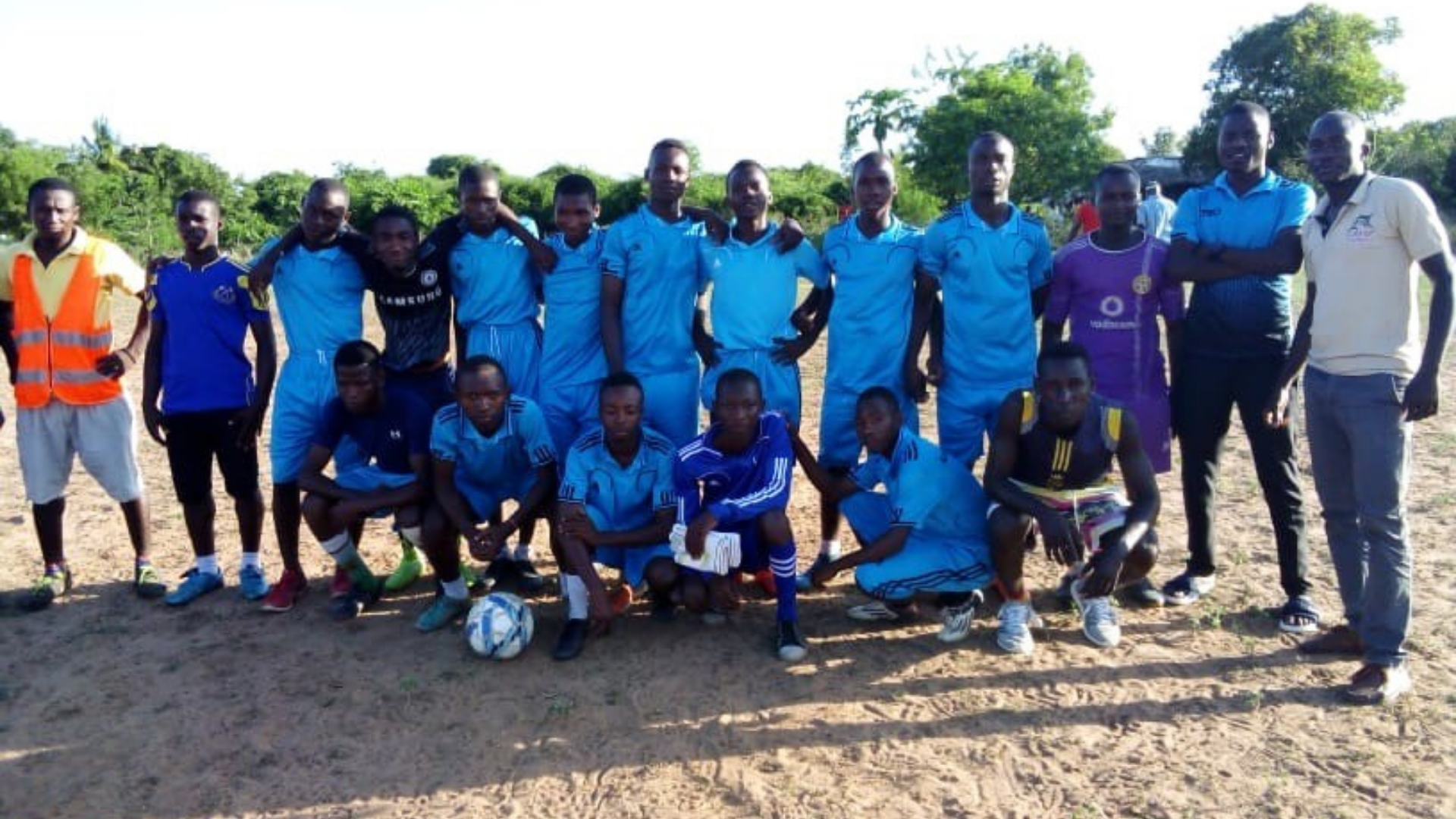 Pictured here is the classroom built out of a shipping container in London, Ontario, by London Christian High (LCH) students and shipped, by boat, to Tanzania. It arrived over the summer and was recently roofed and hooked up to electricity. For most of these kids, it’s the first time they will learn on a computer. A heartfelt thank you to students at LCH for their tremendous work on this project and all the generous donors who made this possible!

Read our latest story from Tanzania about a boy named Mwalimu

Mwalimu is five years old and in kindergarten at Amani. He is described as a happy boy at school, and he likes to play ‘cars’ with the other children outside. “They make cars out of bottles,” Sarah explained, “using the bottle caps as wheels.”

Mwalimu lives with his mother and two older sisters. Several years ago, Mwalimu’s father left the family and married another woman. His mother built their home (pictured) where they live today. Part of the roof is covered only by plastic bags. While Mwalimu’s two older sisters have recently graduated from the Amani school in Tanzania, he is just beginning his journey.

To feed the family, his mother cuts firewood in the bushes to produce and sell charcoal. She also plants cassava, beans, and corn. It’s a hard life, but the education, school food program, and spiritual mentorship at Amani will give Mwalimu some security and foundations for his future. Although his mother cannot financially contribute, she so appreciates what the school is doing and brings cassava and bananas to contribute to the school’s food program when she can.

These Children Need Our Help

Visiting the Children at the Amani School